Rochester Hills–November 6–IAGD always brings interesting Muslims forward to address its congregation, for example Monem Salam, the protagonist of the movie On a Wing and a Prayer, who spoke at IAGD about Islamic finance, or Professor Juan Cole, or many others–certainly last weekendâ€™s guest was no disappointment even compared to the others who have visited.

Aman Ali, a professional journalist who spent last Ramadan touring New York mosques, and this Ramadan touring Americaâ€™s mosques, is fascinating mostly because of the cross-section of American Muslims that he brought to light during his journey to forgotten corners of America.

Ali travelled across the United States this Ramadan with Bassam Tariq, visiting 30 separate states and at least as many mosques–the pair travelled during the day and broke their fast each night in a new mosque.  Bassam took excellent pictures and both wrote.  They maintained a blog during their 30-day mission, to boldly go to where at least some Muslims have gone before.

They had moveable wifi with them, and they continually updated their blog as they travelled.

Aman Ali was introduced, before his speech at IAGD, as a professional journalist who does investigative work for USA Today.

The two friends live in New York City, although neither is originally from there.  Aman explained that in New York City there are about 800,000 Muslims, with â€œ163 different mosques within 10 miles of where I live.â€ The genesis of his mosque trek may have been when his mother told him not to visit the Arab mosque in his home town–such a trip she considered inappropriate given that there already existed a perfectly good south Asian mosque which the family attended.

â€œTo this day I canâ€™t comprehend that statement,â€ says Aman.  He explains, heâ€™s the type of person that if you tell him he canâ€™t do something heâ€™s much more likely to try to do it.

After visiting 30 mosques in 30 days in New York in AH 1430, this year he and Bassam decided to think on a grander scale.  The two asked for donations, $6,000, to fund their journey around the country–and the donations rolled in along with supporting comments from around the world.

The theme of Amanâ€™s speech was the surprisingly welcoming nature of Americans around the country–not only Muslims, but everyone–to him as he travelled around.  He spoke of visiting people in the deep south who welcomed him with open arms despite their display of confederate flags.  He spoke of only one mosque which kicked him out, in Mobile Alabama.  He described many adventures, from a policeman in Biloxi Mississippi to a potentially fatal rock in Montana, and wild wildlife there as well, to a tiny mosque with hand carved doors in Abiquieu New Mexico, a visit to a California Cambodian mosque, Muslims in Las Vegas, Utah, and Idaho, and a visit to the mosque of a community of white convert Muslims, in Pennsylvania, converted by Bawa Muhyiddin.

Aman mentioned many details that are unfortunately impossible to mention in this space for lack of space and time.

Next Ramadan Aman and Bassam hope to visit 30 mosques in 30 countries–tell him he canâ€™t do it if you want, but that will not likely dissuade him.

An audience of perhaps 300 stayed late to hang on Amanâ€™s every word, long after food and prayers were finished.

To see the 30 mosques blog and learn more about Aman and Bassam, please visit http://30mosques.com/ 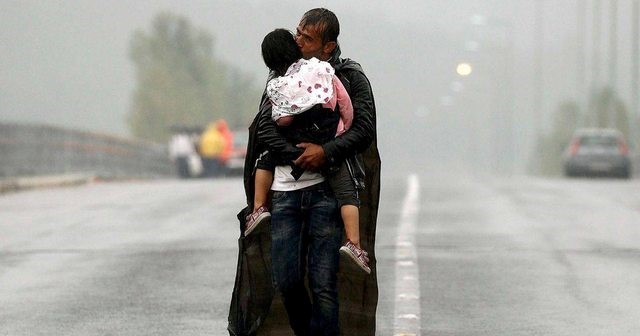 A human, not Syrian, crisis

Only Authentic Leaders Can Deliver a Middle East Peace

Hate, Intolerance, and the Killing of Minorities