Inspired by Baptists a Muslim mother gives back in Houston 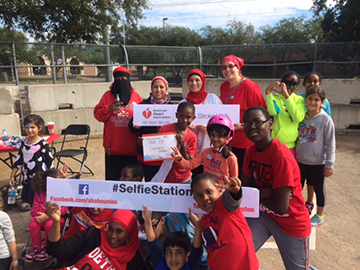 Photo caption: Hammad, third from left in rear, has been hard at work volunteering her time in the Houston area.

A Muslim since she was 18, Ashley Hammad knows that serving others is a mandate from Allah and a mark of a true believer. But it wasn’t Islam that imparted that love for charity, in fact, Hammad said it was her upbringing in the Baptist church that instilled in her a love of service and a heart for helping others. But no matter her faith, Hammad said her mission and the intent behind it are the same.

To that end, Hammad, who lives in Houston, Texas, volunteers several times a year with the Houston Food Bank, spends some of her free time organizing charity runs or school supply drives and often rummages her closets to gather clothing donations for service organizations.

She said her work with the Houston Food Bank is especially humbling considering how hard the group’s organizers work.

“Time is a precious thing and we’re given a lot of it so donating a few hours of my time is nothing, especially compared to what they do to keep that program going,” Hammad said.

She also emphasized how important it is for Muslims, especially women who wear hijab, to put themselves out into the community, to offer up their time and to show the true humanitarian face of Islam.

“When I go (to the Houston Food Bank) I’m the only hijabi there, and I go alone, not with a group,” she said. “I think it’s da’wa (propagation of the faith). I want people to know that Muslims are here to serve the community, not just themselves. That’s a good image of Islam because, if I’m wearing hijab, there’s a chance that I’m making someone think good of Islam.”

But Hammad said volunteering alone is not enough. She said how Muslims present themselves is just as important as what they’re doing.

“When you volunteer, have a smile on your face, be polite, be respectful, be humble, be peaceful, be all the things that Muslims are supposed to be, that should be your goal,” she urged. “Think about it, when you wear a smile and you’re doing your job, at the end of the day how can someone not respect that?”

Hammad knows something of respect, particularly when speaking of her family members, many of whom offered themselves in service and are now her role models. She related stories of Ester Kessler, her maternal grandmother who served in India during World War II as a member of the U.S. Air Force, and told a tale of her great-uncle Vincent Henderson, a merchant marine who was captured as a WWII prisoner of war.

“My mom told me that even after (Henderson) was released he still went back to work on the ships,” Hammad said.

That legacy of service is what Hammad is trying to live up to and even pass on to her two daughters, 9-year-old Yasmeen and 6-year-old Nisreen.
“I want them to be contributing citizens,” she said. “Children learn from what goes on in their own home, so what they see their mother doing they will want to do the same.”

To ensure that happens, Hammad often takes her girls along on her volunteer trips to the Houston Food Bank, and they recently accompanied her and participated in the Houston Heart Walk to raise money for a friend suffering from a heart condition.

Hammad said seeing those in need and hungry at the food bank was eye opening for both girls.

“It was kind of a shock for them,” she said. “They didn’t know anything like that existed but now they do.”

But Hammad’s influence seems to be paying off. At Nisreen’s most recent birthday, the youngster agreed to forgo presents and instead accepted donations of canned food stuffs which she and her older sister Yasmeen then delivered to a local grocery store to be transported to the food bank.
Hammad said her daughter did not lament the loss of gifts, but instead focused on simply enjoying the company of her guests during her birthday party.

“Nisreen was fine with it,” she said. “She just wanted to spend time with her friends.”

With her work to model volunteerism and to encourage charity to her children, Hammad said she hopes to see a bigger push toward those same values within the Muslim community at large, something she believes is lacking.

“We have a duty to go outside of our masjid (and offer service) and there should be more hubs for that, more resources where youth can go to and donate their time, or resources for people to access and get answers about their questions on how to volunteer,” she said. “We need someone at the mosque to pick up the phone and offer that information.”

But she said it’s ultimately up to each individual to do their part and take the initiative. She added that, in this day and age, finding someone or an organization in need of help is simple.

“It’s as easy as Googling volunteer opportunities in your city,” she said.

What Would Prophet Muhammad (s) Do?

In Kind Donations for Pakistan