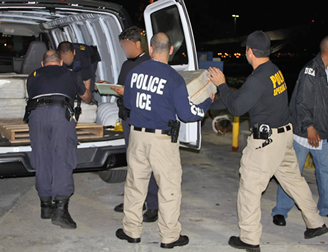 Dozens have gathered outside of Maimonides Medical Center in Brooklyn after Immigration and Customs Enforcement (ICE) officers shot an unarmed 26-year-old man in the face on Thursday. The man, identified as Erick Diaz, was shot when ICE attempted to detain his mother’s boyfriend, Gasper Avedano-Hernandez, NBC News reported. According to the Consulate General of Mexico in New York, Diaz came to the U.S. legally on a visitor visa last week; he is currently hospitalized and is suffering non-threatening injuries. With Diaz, Avedano-Hernandez and two ICE officers were taken to the hospital to treat injuries following the incident. The community has since then gathered to protest ICE’s presence outside the medical center, and to ensure ICE officials do not remove the two men they have in custody prior to investigations.

Diaz reportedly became involved in the incident after he witnessed Avedano-Hernandez being arrested by men in ordinary clothes, without a badge or warrant. According to Diaz’s brother, Kevin Yanez Cruz, Avedano-Hernandez resisted arrest because ICE officers did not identify themselves nor show any proper paperwork or identification.

“(T)hey just tackled him. (The ICE officer) didn’t say, ‘Get down,’ he didn’t say nothing. And he didn’t have nothing, my brother, he didn’t have no weapons in his hands, nothing. The minute they’re tackling him, they get up to the doorstep, I’m here, my brother is here, he thought I was going to get involved, and he pointed the gun at my brother and didn’t even hesitate and pulled the trigger.” Yanez Cruz told ABC News.

According to activists, officers hit Avedano-Hernandez with a taser, and used pepper spray on Diaz before shooting him. ICE admitted that “at least one firearm” was discharged in the altercation, and claimed that officers were “physically attacked while attempting to arrest” Avendano-Hernandez, in a statement ABC News shared. The agency also said Avendano-Hernandez had been deported twice and was in the country illegally.

Avendano-Hernandez was stopped by NYPD Monday for allegedly driving with a forged license plate. Following his arrest, ICE issued a detainer request asking that he be kept past his release date in order for them to take him into custody; however, New York is a sanctuary city and does not permit this. “The New York Police Department [NYPD] arrested Avendando-Hernandez Feb. 3 for possession of a forged instrument, a felony criminal charge. ICE attempted to lodge an immigration detainer after his most recent arrest, however the subject was released from local custody before ICE could lodge a detainer,” ICE said in a statement. The officials claim that these circumstances forced them to arrest Avendano-Hernandez in the city, as opposed to the “safe conditions of a jail.”

Instead of taking responsibility, ICE proceeded to blame NYPD for not complying with its retainer; yet there was no NYPD involvement in the shooting. “An ICE official shot someone and minutes later they attempted to point the finger at the NYPD,” Freddi Goldstein, New York City Hall spokeswoman, told The Guardian. Goldstein didn’t hesitate to share her opinion of ICE, as well as the president. “If that’s not further proof that they’re simply a mouthpiece for a man who lies hundreds of times a day and has absolutely no regard for public safety, I don’t know what is,” she added.

City officials, including New York City Mayor Bill de Blasio, spoke in support of the victims and against ICE on Friday, stating that the shooting was not about “safety and security,” but instead “about [ICE] demonizing immigrants and people of color.”

“ICE [is] doing its own thing, creating havoc in many cases as they did here, creating danger, which they did here,’ de Blasio told “he Brian Lehrer Show,” according to CNN. “They created a very dangerous situation that the NYPD had to come in and stabilize and address.” Others at the press conference agreed, and questioned why ICE is not required to wear body cameras. The incident is supposedly being investigated by the ICE Office of Professional Responsibility, according to a statement by ICE.

The shooting follows an announcement made by Department of Homeland Security (DHS) officials Thursday, regarding a new rule that bans New York residents from participating in certain traveler programs. DHS created this rule as a punishment for the state’s support of immigrant communities and for passing the “Green Light Law,” which grants undocumented residents the ability to acquire a driver’s license. During Tuesday’s State of the Union address, Donald Trump also complained about “sanctuary” cities and states, including New York, for not complying with ICE officials.

This incident is just the latest evidence that ICE will go to any extreme to target immigrants, without fear of accountability. ICE continues to dehumanize and wrongfully treat immigrants by targeting vulnerable populations— including children—all to advance its anti-immigrant agenda. Despite the penalties DHS is enforcing for not complying with its policies, communities remain strong and demand justice and accountability for bad actions taken by ICE officials, proving that In many parts of this country, this type of behavior should not and will not be tolerated. Together, we must stand together and continue to fight the inhumanity ICE enforces.

ICE spreads fear, not safety, and must be abolished.

© 2017 MuslimObserver.com, All Rights Reserved
Israel allows its citizens to visit KSA, but are they really allowed to enter...

The Coronavirus is spreading across Continents
Scroll to top