River Oaks Islamic Center is Greening Ramadan and after!

Being mindful not to waste food and water at iftar, choosing paper products instead of styrofoam, using reusable water bottles, and recycling are some of the ways that River Oaks Islamic Center (ROIC) is trying to ‘green’ Ramadan. The Houston Green Team has been spearheading these efforts, which are part of a broader Greening Ramadan initiative launched by the Islamic Society of North America (ISNA).

The lessons of Ramadan are not, however, limited to one month and therefore these simple practices may be done at homes and mosques throughout the year. “The servants of the All-Merciful are they who move on the earth gently and humbly, and when the ignorant, foolish ones address them, they respond with peace (Quran, 25:63).

Yesterday’s green khutbah, delivered by Jihad Turk, President and Dean of the Bayan Claremont graduate program, was the final step for ROIC to be officially recognized by ISNA as a green Ramadan masjid. Jihad reminded congregants of the Islamic imperative to act as stewards of the earth and to take care of all of God’s creatures. He called on Muslims first to utilize the built-in diversity of the American Islamic community to heal race relations, standing up to injustice and ensuring that black lives do matter; and secondly to lead efforts to reverse the impact that human caused global warming has on our ecosystem. “He it is Who has appointed you vicegerents on the earth (to improve it and rule over it according to God’s commandments) and has exalted some of you over others in degrees (of intelligence, capacity and then wealth and status): thus, He tries you in what He has granted you…” (Qur’an 6:165). 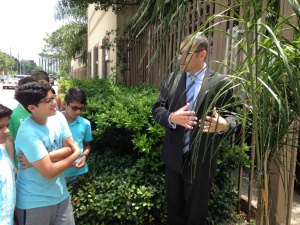 Following the congregational prayer service, the Houston Green Team invited all to gather outside. There, they shared in a special du’a near a palm tree sapling that the Green Team planted. Jihad related a teaching of Prophet Muhammad (peace be upon him) about the importance of planting even on the cusp of the Day of Judgment, “If the Hour is about to be established and one of you was holding a palm shoot, let him take advantage of even one second before the Hour is established to plant it.” The du’a also helped foster a link between ROIC and the green khateeb‘s Islamic Center of Southern California. 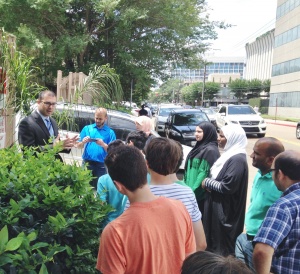 Over the past year Houston Green Team initiatives, in partnership with the ROIC Sunday School and the Islamic Society of Greater Houston administration, have included: planting small garden pots at the Center’s entrance for visitors to sample; hand-painting and hanging colorful birdhouses in the trees surrounding the Center and teaming up with existing city-sponsored environmental programs likeKeep Houston Beautiful for monthly masjid beautification days and litter pickups including along the street and sidewalks shared by ROIC’s neighbors. In each activity, an overarching goal has been to inspire the younger generation to put faith into action. With support from the Center’s former and current associate directors, the Green Team helped ROIC become one of the first mosques in the city to implement City of Houston Recycling Services.

It is the Green Team’s hope that these efforts will be duplicated and improved upon by other mosques and houses of worship, across Houston and more widely. 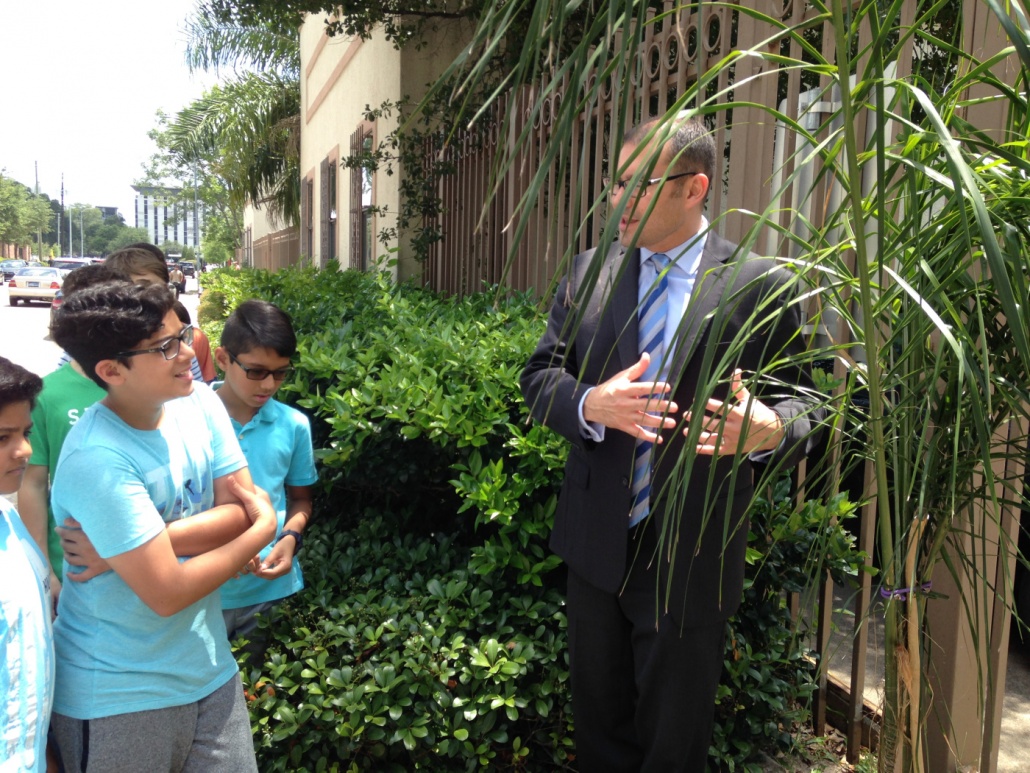 Conference Covering Democracy in the Middle East After the Arab Spring

Face Time with Omar Sharif
Courtesy CNN His name is synonymous with cinema. Egyptian actor Omar Sharif started his celebrated career in 1953 in the…

Investing in our Storytellers.
Scroll to top