Fahd Ahmed, the Executive Director of Desis Rising Up & Moving (DRUM), an organization comprised of low-income, working-class South-Asian immigrant and youth which fights for immigrant, workers, as well as student rights for over 16 years, remarks on why their members decided to organize in response to Trump’s recent string of aberrant executive orders surrounding immigration policies.

“We had the launch of the Kensington ‘hate free zone’ earlier in January. The Kensington, Brooklyn neighborhood, which has a significant population of Bangladeshi immigrants, as well as a dispersal of other South-Asian communities such as Nepali and Pakistani communities. As well as Mexican and Eastern European communities. The development of the action came from our DRUM members who had already seen the development of ‘Hate Free Zone’ from our Queens DRUM members. They wanted to do a similar action in their neighborhood. The system behind ‘Hate Free Zone’ is to build a system to help protect our communities, defend ourselves, defend each other, on an individual level, community level, but also to leverage the power that exists within our communities to be able to fight back. To be particular, the power that can be won through workers, businesses, faith institutions, as well as other institutions within the community.”

During this ongoing rally, there was a similar action where hundreds of New Yorkers rallied in Washington Square Park organized by the New York Chapter of CAIR (Council on American-Islamic Relations) in an ‘emergency’ response nearly 24 hours after rumors have been pressed that President Trump will be passing new executive orders targeting undocumented immigrants as well as a ‘ban’ on several Muslim-majority countries. The emergency rally hosted several faith-based leaders including Arab-American activist Linda Sarsour, who was also one of the co-organizers of the Women’s March. Ahmed adds to why organizing communities that are largely highlighted and targeted by these new orders is especially important in terms of defending themselves for the long run.

“The event was a rally and then a march. Towards the end of the march, we had about 600 people. There were a couple of elected officials, several media folks, and for many people, particularly the Bangladeshi community, it was the first time they can witness this form of action in a neighborhood being led by folks in the community.”

That night, Avenue C Plaza, a public space between MacDonald Ave and Avenue C, became a site of resistance for hundreds of people chanting “No Ban! No Wall!” and “Hate Free Zone.” It was the first time the Bangladeshi immigrant community of Kensington was involved and marched with 600 people demanding an end to President Trump’s campaign promise of securing a militarized U.S-Mexico border as well as targeting undocumented immigrants and Muslims. It was an unprecedented response to an unprecedented order. However, Ahmed scopes a larger perspective on how this action was merely the beginning.

“The launch was only a starting point. We’ve been seeing a lot of actions, demonstrations, press conferences, which were around extending, or uplifting, solidarity within communities and the need to stand against Trump. But for us, it’s not just about declaration. It’s about actually building infrastructure within the community that can defend itself and be able to fight back. And we keep seeing and hearing that the Trump administration is ramping up ICE enforcement in the form of raids and arrests.”

Reflective on the long run of what actions, demonstrations, and what solidarity actually looks like in our communities- several organizations are hosting Know Your Rights workshops across the country in response to ICE [Immigrations and Customs Enforcement] raids and arrests to help communities defend themselves. Nayim Islam, DRUM organizer and member adds, “Communities can use our framework for “Hate Free Zones” to create local community defense networks of individuals, businesses, and institutions to protect themselves from this and any other administration.”

Ahmed concludes, “These are conversations that we believe are important to have in the community. The point of ‘hate free zone’ is to love and protect each other, and what that looks like across the borders and our communities.” 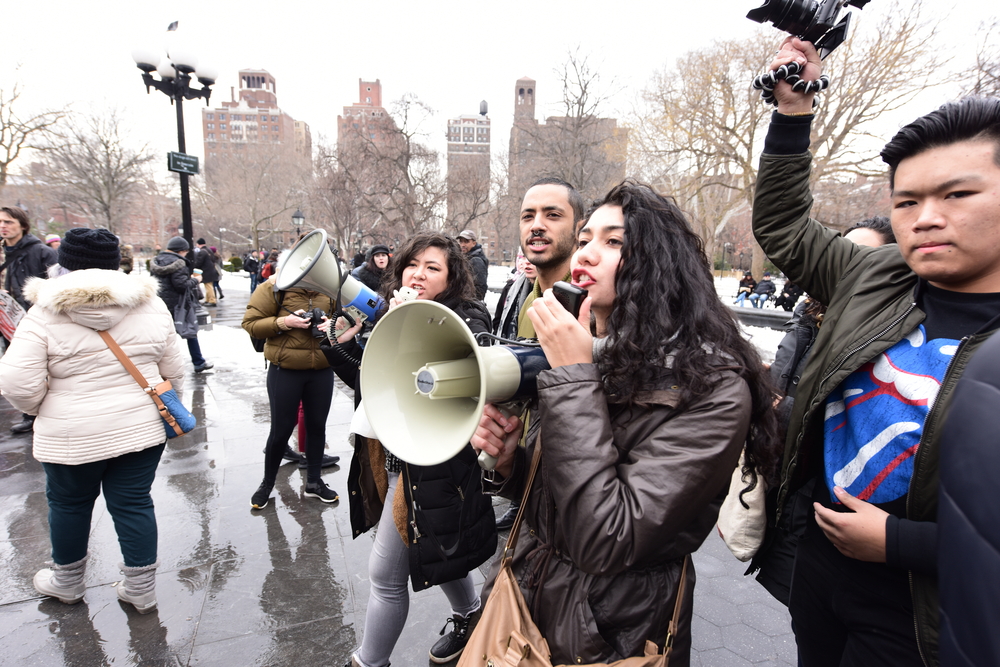 Salt
A crystallized, odorless and flaky substance with a pungent taste and soluble in water. Salt is made up of sodium…

© 2017 MuslimObserver.com, All Rights Reserved
As Americans, We Are All Refugees

The Controversy of having Palestinian-American Model Gigi Hadid on the Cover...
Scroll to top