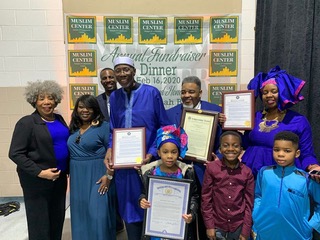 Hundreds recently gathered at the Muslim Center Mosque to honor two giants of leadership and community service: Imam Abdullah El-Amin and Dr. Cheryl El-Amin. The anniversary fundraiser Unifying Our Hearts, Building Our Community took place on Feb 16, 2020, in the multi-purpose room of the large mosque and community center on West Davison in Detroit. It was a gala event that brought members of this historically important institution together with supporters and friends from across the region.

Imam Abdullah El-Amin, a medical technologist, and now Imam Emeretis, serves in many capacities at the Muslim Center and is a pioneer in establishing interfaith connections. Imam Abdullah has been associated with The Muslim Observer newspaper since its inception and his contributions are well recognized.

Cheryl El-Amin (1954-2019) held a doctorate in Human Services and worked as a psychiatric social worker and therapist. Both poured their incredible talents into the Muslim Center over the course of decades. At the event, Imam Abdullah and Dr. Cheryl (as she’s known among the community) received awards and honors for their lifetime service. This included tributes from the offices of U.S. Representative Rashida Tlaib, Michigan Governor Gretchen Whitmer, Wayne County Treasurer Eric R. Sabree, and Detroit City Council President Brenda Jones.

Since 1983, the Muslim Center Mosque and Community Center has offered a place of sustenance and worship that is open and welcoming to all. Under the leadership of Imam El-Amin and Dr. Cheryl, the Muslim Center has supported intensive programming inside the mosque to offer classes, meals, lectures, physical education, a funeral home, a wedding chapel and many other services to the community. For decades, the Muslim Center has provided a weekly soup kitchen and food bank to neighbors living around the mosque. Imam Abdullah and Dr. Cheryl have also lent their support to initiatives such as the HUDA clinic, a free medical clinic across the street from the mosque, and Dream of Detroit, a housing and neighborhood development organization adjacent to the mosque, and many other programs.

Imam El-Amin and Dr. Cheryl have established a remarkable record of bringing people together. Among his many other achievements, Imam El-Amin was the first director of the Council of Islamic Associations of Michigan (CIOM), which is now the Michigan Muslim Community Council (MMCC). Likewise, Dr. Cheryl helped unify communities through her leadership in organizations like the International League of Muslim Women, SHARE-Detroit, the Muslim Alliance of North America and others. Following their legacy, the Unifying Hearts event represented just one of many times that this mainly African American and African mosque welcomed friends with origins from across the Muslim world and beyond. At the event conversations could be heard in Wolof, Mandinka, Bengali, Arabic and French– a mix attesting to how Imam Abdullah and Dr. Cheryl draw people together across racial, ethnic, and linguistic groups.

According to Wayne Country Treasurer Eric Sabree, a long-time friend and participant in the Muslim Center’s activities: “Imam El-Amin and Dr. Cheryl would venture out before it was popular to create connections between Muslims of all ethnic and racial groups. This was not always the case. Muslims more often used to worship and congregate separately. Imam Abdullah and Dr. Cheryl were pioneers in crossing lines and making this change.”

The children of Imam Abdullah and Dr. Cheryl remain actively involved in continuing the legacy of their parents. Maurice El-Amin, now principal of Southeastern High School in Detroit, remembered the way the Muslim Center operated all though out his childhood as a place of community building. He explained that back in the 1980s, where there were not as many Muslims in the area, there was a tendency for people to feel isolated. But, “we were one of a growing number of families who saw the mosque as an extension of their home. We had monthly dinners at the mosque that had an emphasis on cultivating and keeping up with families and building community.”

Maurice’s sister, Zarinah El-Amin, an anthropologist and entrepreneur agrees. “I live in a village. And the center of that village is a town-hall type of building that is the Muslim Center. It has been a space of worship, sustenance, support, and growth for literally thousands upon thousands of people. Growing up, the Muslim Center was my second home. It gave me sisters, aunts, cousins, uncles, grandparents and more.”

Tahira Hassanein Khalid is one of those treasured members of the Muslim Center family. A social worker, researcher, and head counselor at Muslim Family Services-Detroit, Sister Tahira (as she is known) links her lifetime of service and activism to her friendship with Dr. Cheryl. Beginning in the late 1970s, Sister Tahira and Dr. Cheryl began collaborating to found the International League of Muslim Women, Inc., a charitable and social justice organization that has been serving the needs of Muslim families since 1981. According to Sister Tahira, “Dr. Cheryl adopted me into her family as a sister. Our love for each other built the International League of Muslim Women. The El-Amin family exemplifies the Qur’an verse from Surat Maryam, 19:96, which reads, ‘Verily, for those who believe and work deeds of righteousness, the Most Gracious (Allah) will bestow upon them, great love.’”

That loving family-making spirit has bridged generations and different incoming communities. Moussa Niang is Chairman and Treasurer of the Muslim Center board, and founder of Foundation 221, a Detroit-based based non-profit geared toward assisting underprivileged communities in Senegal. Mr. Niang explained how the Muslim Center offered a home for himself, as a Muslim born in Senegal, as well as other African-born Muslims who are relatively recent arrivals to Michigan. He explained, “Imam Abdullah did a lot to welcome Africans in Detroit from Senegal, Gambia, and other African nations. In this, he is making the legacy of Warith Deen Muhammad come alive.”

The keynote lecture was offered by Dr. Su’ad Abul Khabeer, Associate Professor and Director of the Arab and Muslim American Studies Program at the University of Michigan Ann Arbor. Dr. Abdul Khabeer pointed to the extremely important influence of places like the Muslim Center for allowing Muslims from all walks of life to cultivate a sense of their historical lineages and the scope of the intersecting global connections to which they belong. A renowned performance ethnographer. Dr. Abdul Khabeer ended her address with a poetic tribute to African American Muslim women like Dr. Cheryl. “Bold, brilliant, beautiful, Black/ Believing women who built this thing/ Al-Islam in America with their hands.” In her tribute, she described women like Dr. Cheryl as “fearless,” “undaunted,” “inspired by Allah,” “super-smart” healers who give an abundance of love to the people and communities they nurture.

In honor of how Dr. El-Amin valued education and pursued advanced degrees into her adulthood, the Muslim Center has established the Dr. Cheryl El-Amin Memorial Scholarship to provide resources for others to continue their educations, especially those who are single parents seeking to pursue careers in social work, and all others working to complete certifications and degrees beyond the high school level. For more information, contact info@muslimcenterdetroit.com.

Not Guilty, But Jailed for Five Years: Al-Arianâ€™s Third Hunger Strike Under Way

Hopkins to Defend Title this Summer